On Wednesday the 15th of May 2019 participants of the Stepping out Programme launched the premiere of their Stop-Go Animation movie “The Wrong Turn”.

The movie centres around two friends who make different choices on how to live their lives, with very different results.The movie had taken three months to complete with the Stepping out participants building all the individual players in the movie as well as building the movie sets and taking almost a thousand still photos that were joined together to make the movie.

The movie was funded by the Midlands Regional Drug & Alcohol service in coordination with the Athlone Drug Awareness Group and Ger Byrne chairperson of this group was in attendance as well as a representative of the L.W.E.T.B.

In attendance were the Stepping out participant’s representatives of the LWETB, Senior Probation Officer Alma Gavin as well as the Mayor of Athlone Frankie Keena and Counsellor Paul Hogan. Athlone Tidy towns were represented by Gerry Johnson.

Senior Probation officer Alma Gavin said that the work put into this project was a great testament to the work ethic and creativity of the participants attending the programme.

Following the movie one trainee reflected to the audience on the movie, ‘It’s important for young people to know there is another road they can take in life, instead of going down the wrong road’.

Mayor Frankie Keena congratulated the participants of the programme on their hard work and teamwork involved in completing this and other community projects and said that the film ‘Gives a powerful message to young people about life choices with regard to drugs and alcohol’.

The link to the video is: https://youtu.be/JPUk3IC3qLQ 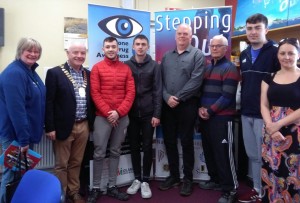 Drugs & Alcohol
- a handbook for parents